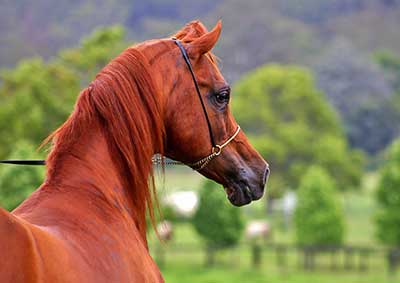 The Arabian or Arab horse is a breed of horse that originated on the Arabian Peninsula. With a distinctive head shape and high tail carriage, the Arabian is one of the most easily recognizable horse breeds in the world. It is also one of the oldest breeds, with archaeological evidence of horses in the Middle East that resemble modern Arabians dating back 4,500 years. Throughout history, Arabian horses have spread around the world by both war and trade, used to improve other breeds by adding speed, refinement, endurance, and strong bone. Today, Arabian bloodlines are found in almost every modern breed of riding horse.

The Arabian developed in a desert climate and was prized by the nomadic Bedouin people, often being brought inside the family tent for shelter and protection from theft. Selective breeding for traits, including an ability to form a cooperative relationship with humans, created a horse breed that is good-natured, quick to learn, and willing to please. The Arabian also developed the high spirit and alertness needed in a horse used for raiding and war. This combination of willingness and sensitivity requires modern Arabian horse owners to handle their horses with competence and respect. 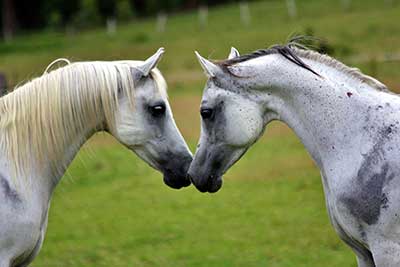 The Arabian is a versatile breed. Arabians dominate the discipline of endurance riding, and compete today in many other fields of equestrian sport. They are one of the top ten most popular horse breeds in the world. They are now found worldwide, including the United States and Canada, United Kingdom, Australia, continental Europe, South America (especially Brazil), and their land of origin, the Middle East.

Arabian horses have refined, wedge-shaped heads, a broad forehead, large eyes, large nostrils, and small muzzles. Most display a distinctive concave, or "dished" profile. Many Arabians also have a slight forehead bulge between their eyes, called the jibbah by the Bedouin, that adds additional sinus capacity, believed to have helped the Arabian horse in its native dry desert climate. Another breed characteristic is an arched neck with a large, well-set windpipe set on a refined, clean throatlatch. This structure of the poll and throatlatch was called the mitbah or mitbeh by the Bedouin. In the ideal Arabian it is long, allowing flexibility in the bridle and room for the windpipe. 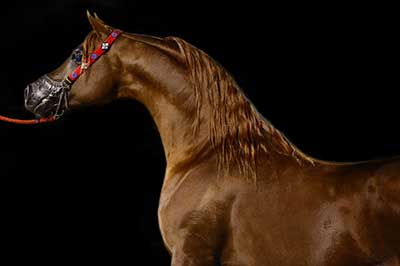 Other distinctive features are a relatively long, level croup, or top of the hindquarters, and naturally high tail carriage. The USEF breed standard requires Arabians have solid bone and standard correct equine conformation. Well-bred Arabians have a deep, well-angled hip and well laid-back shoulder. Within the breed, there are variations. Some individuals have wider, more powerfully muscled hindquarters suitable for intense bursts of activity in events such as reining, while others have longer, leaner muscling better suited for long stretches of flat work such as endurance riding or horse racing. Most have a compact body with a short back. Arabians usually have dense, strong bone, and good hoof walls. They are especially noted for their endurance and the superiority of the breed in Endurance riding competition demonstrates that well-bred Arabians are strong, sound horses with superior stamina. At international FEI-sponsored endurance events, Arabians and half-Arabians are the dominant performers in distance competition.